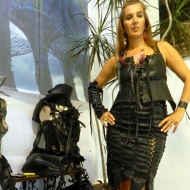 The work of Aidana Baldassarre is driven by the idea of transforming old, discarded elements into new, one-of- a- kind designs of wearable art in an organic way. Trash is her raw material.

A long time self- tough artist, recycler, and freelance designer, born in Italy and raised in Buenos Aires, Argentina Aidana finds inspiration in endless source of ideas and materials, creating up-cycled, wearable art . She loves working with rubber from bicycle inner tubes, plastic, metal, paper and has created over 500 pieces of art since 2004. She first started intrigued by a call for artist is New Zealand back in 2003 where she represented the US creating a dress out of bikes inner tubes, and since then she worked tirelessly to make her passions and dreams became reality creating in 2004 Trash-Fashions Fashion Show, her own solo exhibit presenting pieces of wearable art in life models on a run way show.

Her first museum opportunity came in 2005 when she was selected to be a part of Trashformations East, a five year traveling show that started in Boston MA, Brockton Museum, and continue on to different museums across the USA. Followed by the exhibit ?Toss and Found?, a show curated by Tyler Stevenson that toured for two years the United States and to Rio de Janeiro Brazil, and Beirut in Lebanon, since then she has participated in several other exhibits and shows which includes, just to name a few, ?Puro Diseno?, designed and art show, Buenos Aires, Argentina, ?Bikes Art? exhibit Boulder Colorado, wining second price, ? Art is Life? during Miami Art Basel, The Ethical Fashion Show during Paris Fashion Week, in Paris France and during the summer of 2015 Aidana had the opportunity to work in a collaboration project for Kenneth Cole, creating tote bags out of the brand?s old vintage street billboards.