Growing up on the Texas Gulf Coast, I have always had a fascination with the ocean and everything associated with it. I have a deep respect for its power to destroy and create. I have also struggled with throwing things away unless they had been completely destroyed. I believe that there were many useful parts and pieces that could be re-purposed or recycled and used elsewhere. With that, I decided that I would develop pieces using only scraps, parts, pieces and items destined for the trash bin. Looking to not actually buy any materials other than glue or paint. I was also influenced by the state’s colorful past and how some of that history has morphed over time to create a sort of folklore or tall tale status. From all of that developed what I term the Deep Six Fleet which are these ships that seem to be losing the battle with nature but at the same time seem timeless. Each having it’s own tale drawn from Texas and maritime history where it’s gray as to the truthfulness of the story. 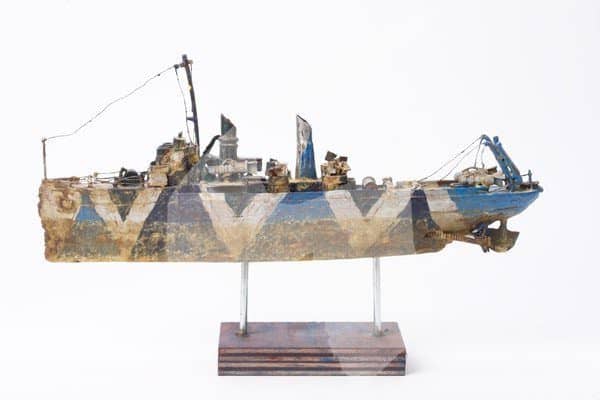