It all started with a broken-down cement mixer! And after much brain-wracking, an idea developed. How my Clanker Robot Sculpture evolved was totally down to what I could find around the workshop. I used old propane tanks, old MIG-welding cylinders, steel tubing scraps and petrol cans.

How I made my Clanker Robot Sculpture:

I assembled the sculpture using things I found around me, and by simply holding bits here and there, trying to get a vision. The robot sculpture looked like it had been through a battle already since most items used were upcycled! The cement mixer set the theme for the project, and at that point, I did make a sketch. “Clanker, the broken war robot, back from a mission” was born. So I set to cutting, welding, cutting, and more welding!

Early on I decided to make this a kinetic sculpture, as the mixer still rotated. This became the cam which flicks and clanks the arms and head, simulating malfunctions. He was finished off with a spray coat of gray, which I mixed from paint remnants, then I added the decals and an all-important can of “Robot Rum” restoration tonic.I have to say; I wasn’t feeling this one until quite late on after the first coat of paint. This can be the way with recycled materials being a myriad of different colors; they can look a bit scrappy so that finishes can be important. Strangely, I feel for Clanker now. He has a downbeat, sorrowful look about him. It’s evident he really has been through some hard times. 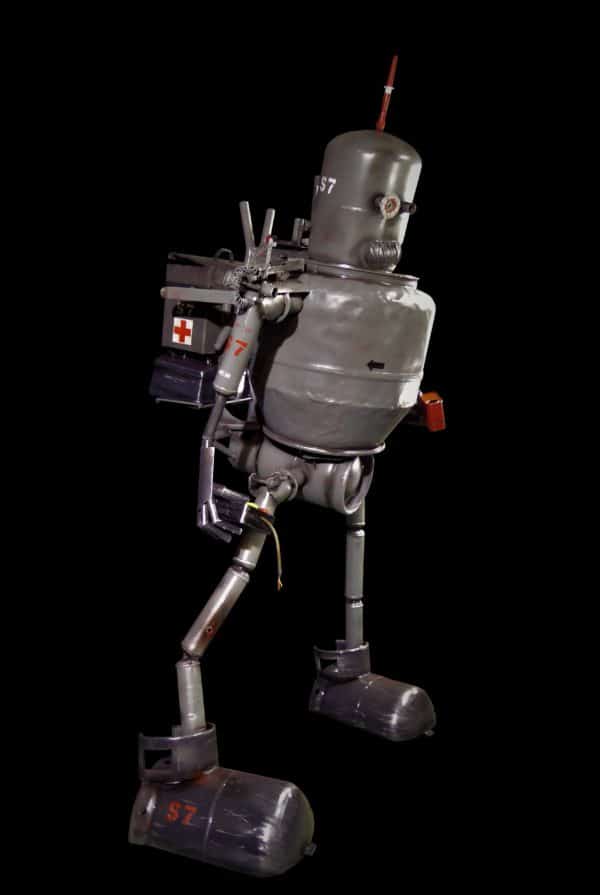