In Sarajevo, the capital of Bosnia and Hercegovina, there are a number of poorly lit locations. Despite the fact that the city centre is generally well lit, there are some streets in the city centre that are poorly lit or even completely dark.In the part of the city centre called »Stari grad« (the Old City), near the famous Bašćaršija (Ottoman market district), lies a modern shopping centre called »Stakleni grad« (literaly meaing glass city), caught in between two large secession style buildings , one on Ferhadija street and the other on Mula Mustafa Bašeskija street. By the south side of Stakleni grad borders on the older bulding, where French Cultural Centre is situated, there the stairs narrow down into a passage that opens onto the very busy Mula Mustafa Bašeskia street. The passage has the shape of a narrow, tall corridor. The entire area of the shopping centre is small and rather crowded. That and the fact that it is poorly lit give it an unpleasant claustrophobic feel. This is reinforced by the fact that after hours it becomes a gathering place for custumers of local night clubs and betting corner shops. All this futher contributes to the fact that the neighbourhood of the French Cultural Centre is deserted and filled with garbage.

Through talking with residents and other people in the city we, the students of architecture and poets from Sarajevo (Bosnia and Hezegovina) and from Ljubljana (Slovenia), came to the idea of lighting up one of such dark spots that cause the feeling of disorientedness and unease in the city space. By lighting it up we hoped to revive the corridor and make it a friendlier place for residents. We wanted to show to all the „users“ of this place that with some effort and ideas we can turn this deserted place around. We decided on a lighting installation made of light objects construted out of waste objects, which we acquired from the local community. Involving the latter we wanted to show that an action like this can contribute to rebuilding the communal spirit. The installation was coupled with a reading performace by poets from both cities. With this one‐time event we hoped to inspire the local artists and residents to start off a series of similar urban interventions.

The project started in Ljubljana (Slovenia), where with help of sponsors we collected all necessary tools, such as used wire, electric cable, bulbs, paint and other tools. With all this we set out for Sarajevo. In Sarajevo the project was divided into more phases, spanning eight days. Our base was in the heart of Bašćaršija, the Old City Centre, in the Mak Dizdar Gallery. There we first made a plan of the installation and started gathering the artefacts – waste objects donated by the people living in nearby buidings. In exchange for such an object they received a poem, which was recited to them at their doorstep by the poet who wrote it. We used this also as an opportunity to invite the local residents to take part in our installation and to come to the evening event. Another way of inviting the residents of Sarajevo to come to the event was by reading poetry on the Number 4 tram that runs from Bašćaršija to Ilidža. The objects gathered were turned into light objects – we did all the wiring ourselves, although the lights were tested by experts before the event for safety. Ongoing with the making of lights was also the concept of reading and positioning of the poets within the light installation. On the evening before the event we took all the light objects to our chosen location and tested them, both technically and conceptually.

The installation opened the next day with the reading performance. The entire area of the corridor was filled with light objects, right form the stairs up to the exit on Mula Mustafa Bašeskija Street. There the old wheel was turned into a light that hung above the entrance/exit and alerted the passers by that something is going on in the passage. Inside it, two screens made out of paper divided the narrowest part of the passage into three parts, one for each poet who participated in the team working on the lights. The light effects produced by the screens would usher the visitor further up to the central part on the staircase. Here the objects made out of waste computer parts, umbrellas, old radios, boxes, cardbord, cups and even a tea pot were given a new life and became, togeher with poetry and the night sky, a part of the city’s pulse.

We did the project on our own, without any additional funding. That was perhaps also the reason why a lot of people were more willing to participate and help. The interest and good will of local residents was present from the start, as they generously opened doors for us and exchanged with us used objects for poetry. But by far the greatest impact was that of the poetry reading on the tram, where passengers responded by reading or reciting poetry themselves. On the night of the event there were about fifty visitors, who by coming to the event participated in the installation. The reactions of the audience were favourable, as were from all of the participants, so much so that some of the participants from Sarajevo even wrote poetry about it. We wish to repeat a similar event in Ljubljana, Slovenia, and so continue the project.

The objects were given a new life. We succeeded in forming a connection between two cultural environments, also by linking two forms of art expression, poetry and architecture. We hope our enthusiasm and voluntary work will convince the people of Sarajevo that it doesn’t take much to turn a dark place into a place of light. 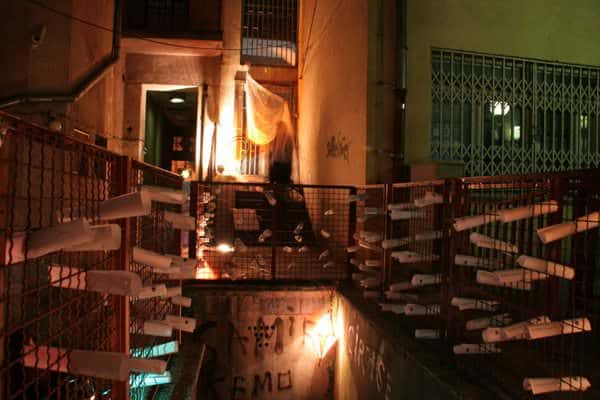 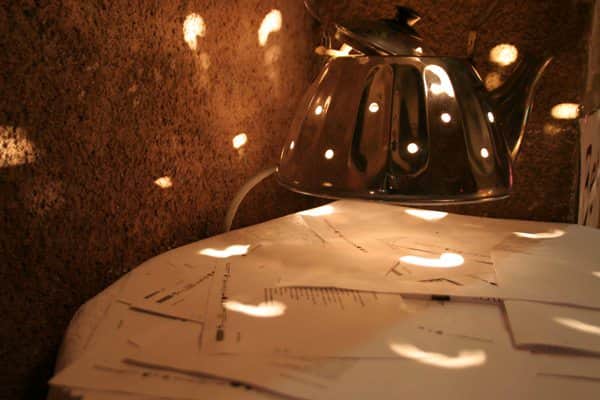 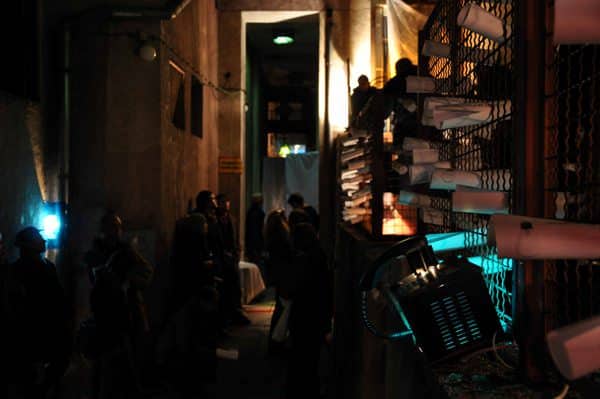