Shrine: A Torii Gate (Where the Spirits Are More Likely to Hear Your Prayers)

A public interactive sound sculpture that allows the spectators to express themselves and play music and messages directly through it.
200 recycled loudspeakers are mounted on a 4 -meter high Torii Gate structure and connected together. Four people can simultaneously be connected to a 8-channel speakers system that allows them to express themselves directly via a microphone input or their smart phones with Bluetooth technology.
At the same time the sculpture amplifies “recycled“ electromagnetic waves (white noise): the low-volume sounds are permanently hearable as a “background” sound that changes throughout the day: this is the “pulse” of the sculpture.  Additionally SHRINE can also be used as a sound system for concerts, formal occasions and open-air events.

It will be able to travel after the exhibition in December 2015. 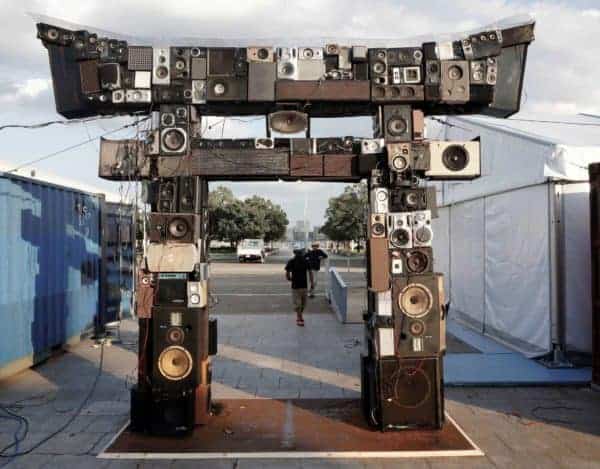 And in action: It is interesting to note that the maiden in the service of a Shinto Shrine , called “Miko” in Japanese (in this case You Kaneko, dedicates her dance to a shrine.