London, Bermondsey Street, Back Yard Antique Market.
A vendor who calls me darling every 15 seconds has dozens of vintage pocket watches on display. For a reasonable price. Well, reasonable for London, anyway. A few stalls further, shoeboxes full of old black-and-white photographs await. All those nameless people, long gone. I try not to buy too many pictures.
I start working on my idea right away. A broken pocket watch is given a new lining, which I cut from an especially moving picture. For the women in this picture,time has stopped, and so it has for the watch: they go together well.
And now that I wear them around my neck, they are, in a way, less forgotten than they were before.

Something has been scratched onto the inside of the watch’s cover: N. Peckham, Minstead, Hunts.
From a report on unrecovered RAF flights during WW II I learn that a Sgt. N. Peckham took off from RAF Skellingthorpe at 1750 hours on the night of 7/8th March 1945, detailed to bomb oil installations at Harburg, Germany. Nothing was heard from the aircraft after take off and it failed to return to base. There is no known grave for him. 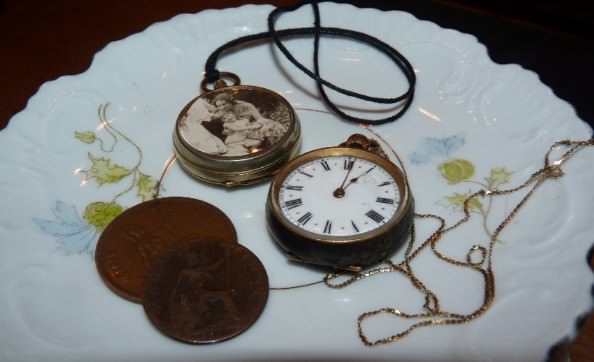 I just love it. Great information ♡