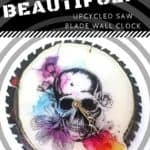 Badass and beautiful: this Upcycled Chop Saw Blade Clock is both! When you change a blade on your saw, don’t throw it out! Turn it into a Clock!

Make a Saw Blade Clock instead of throwing out that old saw blade!

I wanted to make a clock out of the worn out saw blade and had the idea to turn it into a clock. I found a picture I liked that would fit on the old 10″ blade. I finally found one and glued it to the metal. Next, I attached some string on the back with Gorilla glue so that I could hang it on the wall. I covered the picture with clear epoxy, and cut out the center hole in the picture for the clockworks.  Allow the epoxy to dry. Finally, I installed the clock kit according to the directions, added a battery, set the time, and hung it up! Voila!