I decide not too long ago to get rid of the orange in our living room. It was just too shocking a color and made the room look darker. And since the room is already pretty dark on its own, this is not a good thing. The trick is that I’m not going to throw anything away or buy anything new, I’m going to repurpose everything orange.

The first thing I decided to tackle was the myriad of storage boxes that we bought at Ikea a few years ago. This was just after my hubby and I had just moved in together. We were mixing all our stuff and the living room was a clean slate (well not really, since we had a ton of mismatched hand me downs between us). We I hadn’t decided what colors I wanted to use in the living room yet, and since I had some orange accessories from before, we just got some white, orange and green boxes. Should have just gotten the blue…

Wow, Shout actually works! I’m doing the laundry while writing this post and used it for the first time to treat a set in grease stain (I always try to go the more natural route and use baby powder for fresh grease stains. But this was already set in). No trace of the stain, my shirt is saved!!!

Anyway, back to the project at hand.

I didn’t actually know what I was going to do with these boxes until I saw Stacy’s (Not Just A Housewife) beautiful home office reveal. She painted her white Ikea magazine boxes blue.

I came across this creamy yellow Rustoleum (Sunflower Satin) paint at Home Depot and knew it would be perfect. Since the color was so light I didn’t want to just paint them but create some sort of pattern. At first I was thinking polka dots, but the thought of having to cut out all those circles was just too much. I found a generic zebra pattern online and modeled my painter’s tape stencil from that.

I removed the label holder and taped the metal trim with painter’s tape. I gave them a couple of coats of white primer and a couple of the sunflower. You have to inverse the colors, whatever color you want the stripes to be goes on first then you paint the background color over the stencil. Both the primer and yellow are matte, I think that looks better on these.

For some reason the paint on one of the boxes was a bit rough. So I gently sanded it with a 220 grit sandpaper and it worked like a charm. While I was literally waiting for paint to dry, I cut out all my zebra stripes from painters tape. I cut all shape and sizes, just enough for one box. I got a little impatient during the painting process and sprayed way too much. I had to wipe the globs of paint with a napkin. I then patiently gave it a couple of light coats and it was almost good as new. Luckily this happened on the back side of the box, which no one will ever see.

Of course, I was so into painting and cutting that I forgot to take a picture of the taped zebra pattern on the box. But you can sort of see it here. When doing this, don’t over think the placement. Just put the stripes on randomly and if something doesn’t look right you can just remove it and place it somewhere else. In my true frugal style I reused the zebra stripes on the second box. This is how the finished product looked. After taking this picture I realized they were missing something. I went onto Word and printed out a couple of labels. Ahh, much better, now we can both store our stuff.
Oh, just a note. Make sure to press the stencil tape down really well, if not you’ll get some small runs like I did here below (by the label).

Now It’s on to the next orange thing. 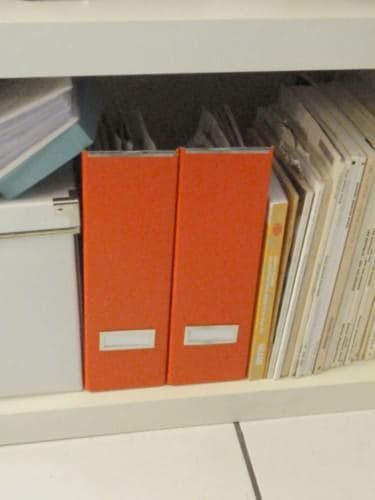 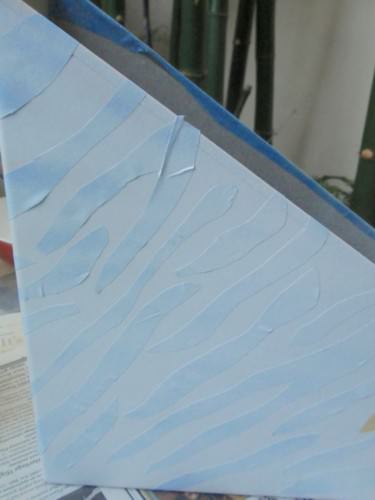 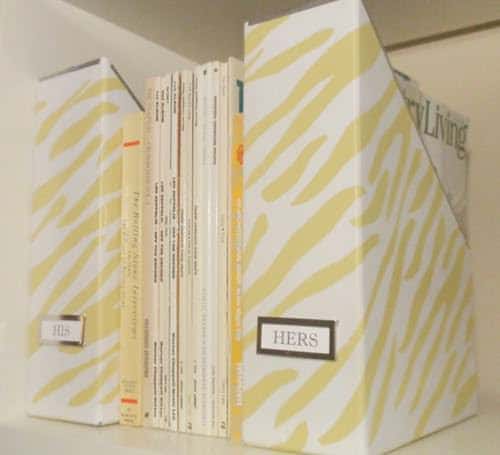